Hummus has been around for a long, long time. It was the ultimate “fast” food that was easy to carry. When Bedouin tribes traveled with their herds from place to place, carrying dried grains that were ground up was a lightweight and economical option. It also was a great source of protein. I am so glad that it has become one of the “in” foods. High in protein, good quality monounsaturated fats and delightful flavor…what’s not to like? Here’s a fast, easy and very budget friendly version.
What makes it especially economical is the use of whole sesame seeds instead of Tahini in a jar. Tahini is a paste made of sesame seeds that adds tremendous flavor to this dish and It’s rich in minerals such as phosphorus, lecithin, magnesium, potassium and iron, not to mention essential amino acid Methionine, which aids in liver detoxification. It is also high in Vitamin E and a host of B vitamins and calcium. It’s the ultimate brain food. 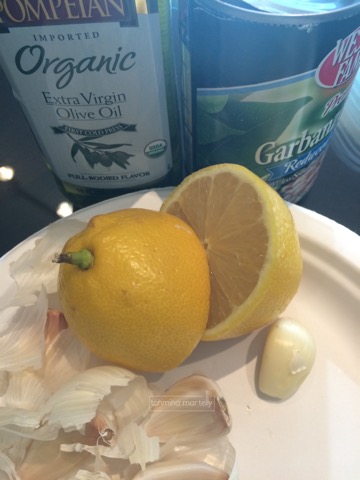 Use sesame seeds instead of tahini paste

So let’s get to the recipe.

In a food processor, dump in the garbanzo beans and pulse a few times. Add the sesame seeds (you pulse the garbanzo beans first so the sesame seeds don’t fall to the bottom of the processor) and garlic and pulse 3 or 4 times. Add in lemon juice and turn on the food processor. As the processor is doing its work, begin to drizzle in the olive oil through the lid opening until the mixture begins to get nice and smooth. Add salt to taste and pulse a few times. Pour into a bowl and drizzle a bit more good quality olive oil. Serve with Pita bread, vegetable strips or Pita chips and enjoy. Makes 2 1/2 cups. Serving size 1/2 cup. Cost per serving 48 cents.

This Coconut Rice is super tasty and originates from the Southern part of India.  Most places that grow coconut has some kind of a coconut rice recipe.  Jamaicans have a coconut rice recipe where the coconut milk is used directly with the rice and it’s a rich, sweet rice.  Marshall Islanders make shredded coconut and white rice balls that are very popular and eaten with savory foods even though the rice balls are quite sweet tasting.  The tastes, styles and flavors are as varied as the locales coconuts are grown in.  I really enjoy this South Indian version because it has a wonderful crunch not only from the nuts but from the lentils that are stir fried .  The toasted coconut adds depth, texture and tastes heavenly.  This rice is very versatile.  I’ve paired it with Indonesian style chicken or with Chicken satay or to make my “Caribbean style rice bowl” (recipe to follow soon).  Hope you like it!

In a wok or large skillet heat the oil and add the lentils, mustard, cumin seeds, salt.  Stir fry for a few minutes until flavors are released.  Add the nuts and stir fry another minute or so then add coconut and cook about 2 minutes.  Coconut will start becoming toasted and start smelling wonderful. Add the  rice and stir fry gently to incorporate.  Serve warm.  Great as a leftover by itself or with other dishes.

I enjoy kofta curries because I think they are fun. I just made a chicken kofta curry not too long ago and last night decided to throw together a paneer version.  I’m leaving for an out-of-town speaking engagement so I wanted to use up whatever I thought would not last the next four days or so (which included some leftover paneer).  I found one sweet potato in the bottom drawer and some cilantro and chilies that needed to be used up ASAP.  I also didn’t take as many ingredient pictures because I was kind of cooking as I was going along.  I wasn’t sure how the sweet potato would taste in the dish but ended up liking the sweetness balanced with the other spices.  Let me know what you think! 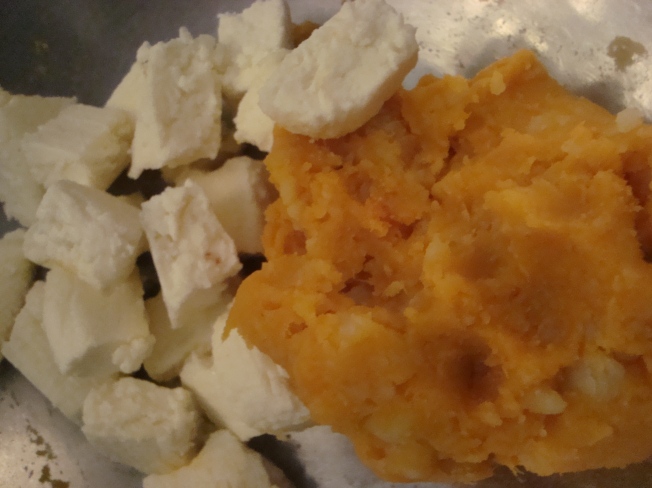 The potato to paneer ratio should be about 1:1, I kind of liked the sweet potato and regular potato mixture, give it a sweet and spicy kick

Add in all the other ingredient

Coat the koftas in a flour batter 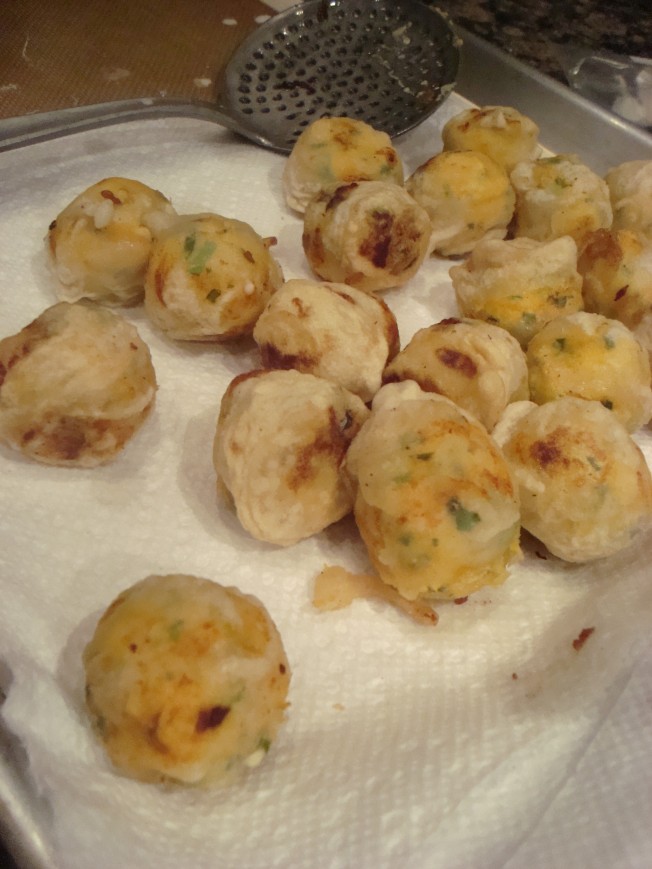 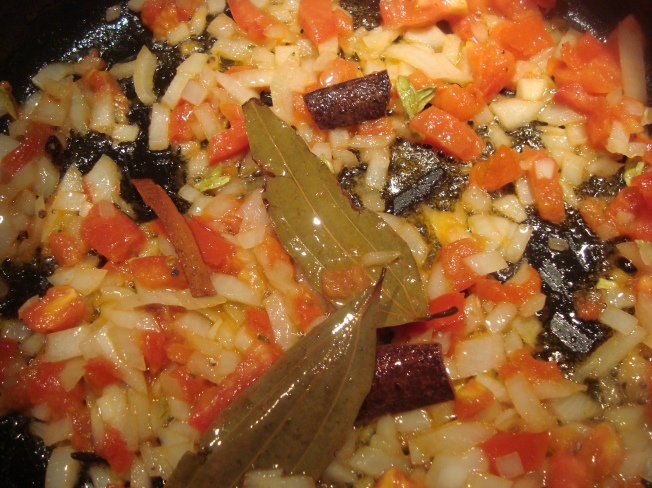 Saute the onions and tomatoes along with bay leaves, cardamom, cloves and cinnamon sticks together until fragrant 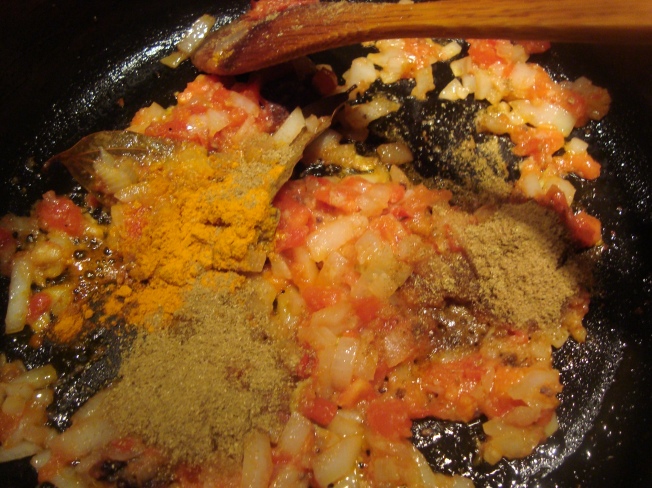 Add in all the other spices

Add tomato paste and then some water

Add in yogurt or coconut milk (whichever you prefer along with additional water) and let sauce simmer for 4-5 minutes. 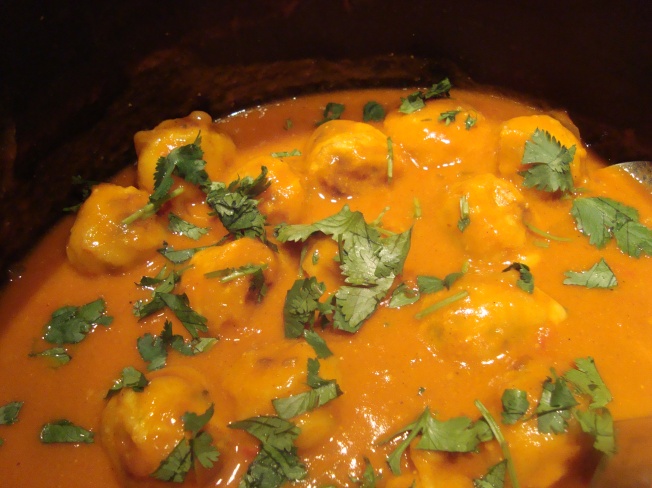 Add in koftas, cook an additional 2-3 minutes before sprinkling with fresh cilantro

Great served with rice or naan

some fresh chopped cilantro for the end

Pierce the skin of the potatoes with a fork and microwave for about 5 minutes until they are tender.  Take off the skin and mash together.  I avoid boiling the potatoes since I want a dry mixture and don’t want to introduce any more moisture.  The yielded potatoes should be about 1 cup.  Mix potatoes, paneer and all the other ingredients for the koftas together and form into small balls a little bigger than the size of a quarter.  They will expand a little in the sauce so you don’t want them too big and mushy.  Make a thin batter out of flour and water (about the consistency of crepe batter).  Coat each kofta in the batter and fry them quickly in some oil.  I used a small pan and a higher heat.  I was trying to give the koftas a coating to keep them from falling apart since they don’t have the resiliency of meatballs.  Set the koftas on a paper towel lined pan to absorb excess oil.

In a medium sauce pan heat oil and begin sauteing onion and tomatoes together.  Add in bay leaf, cloves, cinnamon and crushed cardamom pods.  Stir fry until fragrant.  Add in turmeric, cumin, coriander, chili and stir fry for a few minutes before adding the garlic and ginger. Add in 1/2 cup of water and the tomato paste stir until everything is incorporated.  Stir in yogurt  and another cup of water or if you’re using coconut milk instead, add that in.  Let the sauce cook for 3-4 minutes until all the flavors are well incorporated, check for salt and adjust accordingly.  Drop in the kofta balls and gently stir.  Cover and let it cook about 2 minutes. Koftas will grow in size as they soak in some of the sauce.  Garnish with fresh chopped cilantro and serve with rice or naan.

As a dietitian, I get asked about food related things all the time.  Usually at parties or social situations.  “Do you have a special diet to reduce gas?”  “What should I cook for my kids who are allergic to peanuts, dairy, gluten and corn?” My personal favorite, “I don’t like to exercise but do you have a diet for me to lose about 20 pounds?”  Contrary to popular belief, dietitians don’t go around making up “diets” or prescribing magic food pills.  It’s still a good idea to eat things in moderation and to exercise regularly but I guess that advice is just not sexy enough. (I feel a rant coming on….)

In the last several years people have been diagnosed with a lot more food allergies or intolerances.  Gluten (the protein found in wheat, rhy, spelt and bulgar and wheat by-products) allergies are becoming very common as well as various nut allergies and a hyper sensitivity to high fructose corn syrup.  A typical western diet is very high in gluten and processed sugars. There are two simple solutions to these dietary dilemmas:  Learn to eat and actually try a variety of foods and cook something! Whenever we buy pre-packaged foods, we deliver control of our life to someone else and it costs more, not only the food but long-term health related costs. I know sometimes it can’t be avoided but I’m not willing to trade convenience for the sake good taste or health!…..official END of rant here.

Most people who live in the U.S. have never thought of cooking tapioca (which is actually a starch from the Cassava plant) in savory dishes.  It is reserved mostly for puddings or the ubiquitous “frog eye salad” (not really a salad but a Jello concoction).  Tapioca can be eaten in a variety of savory dishes.  Here’s a Sobudhana kitchuri ( Sobudhana means Tapioca and Kitchuri basically means a “hodge podge” or “mixture”) made out of tapioca.  I made a kitchuri out of Quinoa not too long ago and this is very similar. It’s a tasty alternative to rice or pasta and it’s totally gluten free and vegan.  Besides the soaking of the tapioca (just do it overnight) everything comes together in 8 minutes.  I timed it!

Most of the ingredients (minus the peas and the lemon--oops)

Toast the cashews in a hot dry skillet 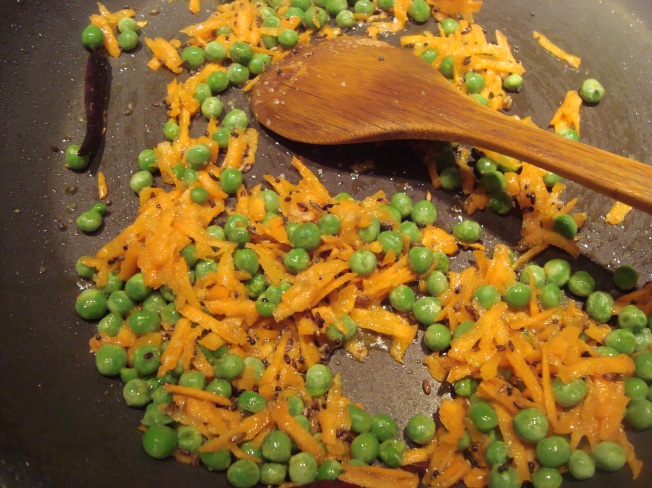 Add garlic and apricots to the mixture and stir fry 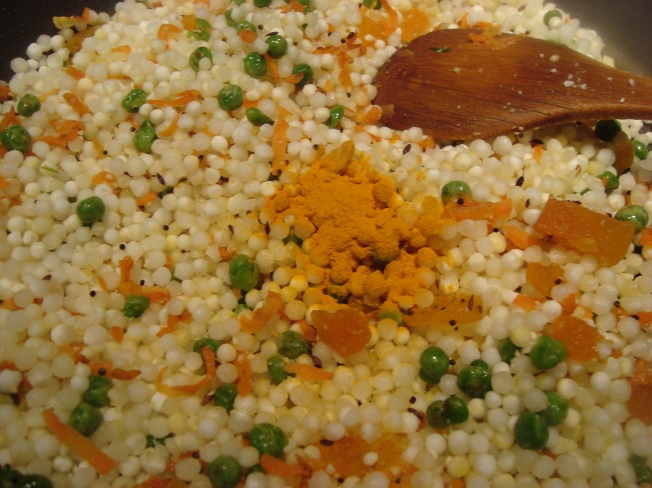 Add tapioca to the mix then add the turmeric

Add in cashews, lemon juice and chopped cilantro and take off heat

It's slightly sweet and spicy with a delightful crunch

Gently was the tapioca in COLD water (or you’ll have a hot mess) and put 1/2 cup of cold water in tapioca to soak 6-8 hours.  Do not skimp on the time, this helps the tapioca fluff up but also to dry out so it’s not a gelatinous mess when stir frying.

In a dry hot skillet stir fry the cashews until they are toasted.  Set aside.  In the same skillet add the oil and heat it up.  Add cumin seeds, black mustard seeds and the red chili peppers.  Stir fry until the mustard seeds and cumin seeds start crackling.  Add in the peas and shredded carrot and stir fry a few minutes.  Add in garlic and chopped apricots and stir to incorporate then add in the tapioca.  Stir fry until everything is blended in, then add the turmeric, lemon juice and chopped cilantro leaves.  Mix well and take off heat. Serve warm.

Click on something that sounds good and see where it takes you: